Let's face it - Mr. Ninja and I don't like taking selfies. I like photography in general (I'm sure people who know what my Instagram page looks like can vouch for that) but for me it's more about preserving a memory than anything else.

And sometimes there's a moment you want to preserve which involves two people who don't really want to be in the picture. Oh well, I try.

Mostly I think I do this as a way of compensating for my really bad memory. One day I'll probably thank myself.

Posted by Daughter of the Cut-Forest at 8:17 AM No comments:

There was a time when Mr. Ninja used to listen to a certain song that he liked - all the time. Which is great, I get that..sometimes you really like a song and feel like you have to listen to it over and over again. Just the other day I got into the mood for 70's rock and played Styx's 'Renegade' on loop all day.

Thank goodness for earphones - else people around me would have lost their minds from being subjected to my earworm loops.

Mr. Ninja usually plays his music on the TV, in the car, etc. - which means, if he has an earworm you are going to know about it. Not only that, the song is going to remain constant till the next big tune comes along..which means it could be months before the next track change. If you're lucky, it could be a song that you like too - else, brace yourselves.

Now even if they are beautiful songs and I like them, sometimes I lose my mind..just a little bit. Hey, it could happen to anyone!
Did I say Throwback Thursday? I meant Throw Out Thursday. 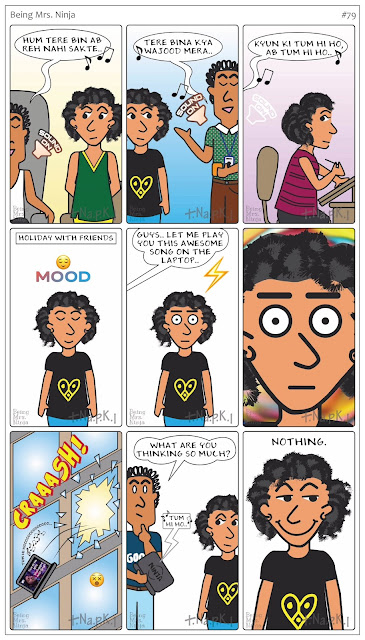 Posted by Daughter of the Cut-Forest at 12:57 PM No comments:

Daughter of the Cut-Forest
I like to keep myself busy. Oh, and dinosaurs.